Supposedly Jackie Chan’s “last full-length action spectacle” Chinese Zodiac certainly marks the end of an era yet does Chan go out on a high note or does he embarrass himself silly?  For the most part, Chinese Zodiac is a return to form that exemplified Chan’s Chinese movie output circa the 1980s and early 1990s before Rumble in the Bronx propelled him to make a slew of average Hollywood movies.  This basically means that Chan has returned to making a lighthearted hokey film where the focus is clearly on innovative physical action sequences featuring Chan doing all his own stunts at the expense of plot, characterization and pace.  At the same time Chinese Zodiac features one horrendous misfire by including a totally pompous and preachy morality angle where characters often lurch into long patriotic diatribes that have as much subtlety as a giant mallet to the face.

END_OF_DOCUMENT_TOKEN_TO_BE_REPLACED 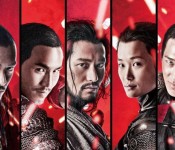 A modern reworking only very loosely based on the 1975 Shaw Brothers film this new installment of The Guillotines (2012) by director Andrew Lau is completely D.O.A. with a completely impenetrable patch-work plot, cardboard characters and a lack of guillotine-inspired action.  Lau is no stranger to the action genre having helmed some of the biggest Hong Kong films of the past few decades including Young and Dangerous, The Storm Riders, A Man Called Hero and the entire Infernal Affairs trilogy making The Guillotines’ total lack of action acumen a mystery on the level of the location of the Lost Ark of the Covenant.

END_OF_DOCUMENT_TOKEN_TO_BE_REPLACED

Treasure Hunter is a film so inept that it defies explanation and begs the eternal question, “What were they thinking?”  It is almost as if the entire cast and crew got together at the start of production with one goal in mind to make a movie so abysmal that it would give eternal whipping boy Battlefield Earth a run for its money as one of, if not the worse, movie of all time.  This is one of those films that leave a foul odour in its wake and all involved should be supremely embarrassed by the end product so shockingly dire that they should count themselves lucky if they ever are employed in the industry again.

END_OF_DOCUMENT_TOKEN_TO_BE_REPLACED 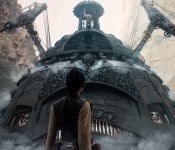 Consistently stylish as well as almost completely self-referential Taichi Zero has been advertised as being the first in a new breed of Kung-Fu movie that melds traditional narratives with modern sensibilities. Don’t believe the marketing. Taichi Zero nails its Michael Bay sensitivities well enough with an overabundance of slow motion and rapid fire editing but it is also saddled with a less than engaging narrative, wooden performances and a next to total lack of pace including a demoralizing third act that sucks the life out of the movie like a rabid vampire who hasn’t fed in centuries. Director/actor Stephen Fung tries the kitchen sink approach to filmmaking crafting a visually engaging yarn but his direction feels forced as if he made the erroneous decision that more equals better. It simply doesn’t jive and by the end of the film you can tell that Fung has long since run out of parlor tricks to captivate audiences leaving the film wallowing like a beached whale.

END_OF_DOCUMENT_TOKEN_TO_BE_REPLACED

History goes completely out the window in this prequel to the Donnie Yen Ip Man films with newcomer Dennis To taking over the lead role playing a young version of the title character in his formative years before he took over as master and starting teaching the Wing Chun martial arts style. The movie play incredibly loose with the facts here and while some of it is true for the most part the entire narrative is completely fabricated with the inclusion of yet another hoary old love triangle and an inherently bizarre subplot featuring, you guessed it, another evil Japanese antagonist that makes as much sense as sticking a wet finger into a live electrical socket. While utilizing cartoon-like evil Japanese characters comes as no surprise the villain’s plot is so woefully unbelievable I had to actually rewind a key scene to watch it again to make sure I didn’t hear it incorrectly.

END_OF_DOCUMENT_TOKEN_TO_BE_REPLACED

Herman Yau’s Woman Knight of Mirror Lake is a massive surprise presenting a topical biopic of Qiu Jin (Huang Yi) a turn of the century feminist figure in China who not only gained prominence for championing women’s rights but also actively participated in the uprising that eventually sparked the Chinese Civil War and the ultimate downfall of the Qing dynasty.   This biopic is often a bit too heavy-handed and though the martial arts sequences are well done they feel as if they don’t truly belong in this particular narrative.  Nevertheless, the movie succeeds and certainly passes the test that most biopics strive for in providing an insightful look into a historical figure that is both illuminating as well as uplifting.

END_OF_DOCUMENT_TOKEN_TO_BE_REPLACED 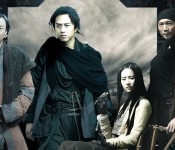 An unnecessarily complicated plot coupled with a next to total lack of rhythm sends this period piece careening off the cliff leaving viewers completely exasperated and quite frankly befuddled.  The Four is a movie which defies easy genre categorization since it contains elements of the traditional martial arts movie set in ancient China replete with wire-aided effects joined with an oddball combination of a murder mystery and, wait for it, zombies.  Yes, they might not be called zombies specifically but when the main antagonist’s evil scheme is revealed to be nothing more than utilizing re-animated corpses you might as well hope Jill Valentine and Chris Redfield from the Resident Evil videogames show up and shoot the place to Hell.  At the very least it would be vastly more entertaining than this inert mess.

END_OF_DOCUMENT_TOKEN_TO_BE_REPLACED 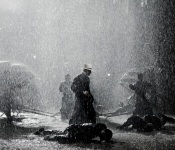 Normally I wouldn’t post a trailer to a foreign movie without English subtitles but when it is from Hong Kong auteur Wong Kar-Wai I’ll make an exception.  Wong Kar-Wai is in no way a household name but amongst cinephiles his reputation is ironclad.  His Hong Kong movie output is second to none with critically acclaimed films such as Chungking Express (1994), Ashes of Time (1994), Fallen Angels (1995), Happy Together (1997), In the Mood for Love (2000) and 2046 (2004).  His only real disaster was 2007’s My Blueberry Nights when he attempted to make a Western movie starring Jude Law and, of all people, singer Norah Jones.  Now, after five tortuous years of filming and editing (he’s known for a long production schedule) his newest film The Grandmasters finally looks like it is ready to be released.