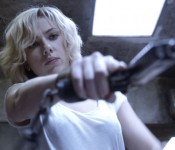 Love him or hate him French “auteur” Luc Besson certainly remains relevant although one could easily make the argument that his heyday helming La Femme Nikita (1990), Leon: The Professional (1994) and The Fifth Element (1997) now seem like a lifetime ago. He really hasn’t directed a true International hit since that period although he has kept himself more than busy writing and producing hit films most presciently being the Transporter trilogy as well as being the one responsible for turning Liam Neeson into an action superstar with the film Taken back in 2008.

Besson’s recent directing gigs have resulted in box office flops such as The Lady (2011) with Michelle Yeoh that grossed a paltry global take of $3.7 million and last year’s The Family with Robert DeNiro and Michelle Pfeiffer that pulled in $68 million worldwide.

Now Besson is back with Lucy (2014) in the dual role of director/writer as he makes another attempt at recapturing his past glory. Much like he did with La Femme Nikita, Besson has crafted a film with a strong female protagonist, this time played by Scarlett Johansson who is supported by stalwart thespian, Morgan Freeman.

The plot seems classic Besson as it showcases Johansson as a woman who is accidentally ensnared in the drug trade and is forced to become a human mule to transport illegal substances. However, something obviously goes awry and the experimental drug seeps into her bloodstream, turning her into a kind of superhero.

In a very ironic move this presents Johansson with a true superhero vehicle although she is also playing the character of Black Widow in the Marvel/Disney universe of films. Studio execs take note: we need more female action movies and Marvel/Disney really needs to take a gamble and put some serious cash down to make a big-budget movie featuring a female superhero like Black Widow.

Studio execs have always been hesitant to pony up serious cash for films featuring female action stars even though last year proved them dead wrong with movies like Sandra Bullock’s Gravity and obviously Jennifer Lawrence in Hunger Games: Catching Fire which actually was the #1 grossing box office domestic film of the year with over $400 million.

Regardless, Lucy is probably going to have a hard time “catching fire” merely because it opens in Canada/USA on August 8th which places it in a head-on collision with Teenage Mutant Ninja Turtles and only one week after Marvel’s Guardians of the Galaxy. This is pretty much the lousiest timeframe to open the film yet Universal Pictures doesn’t seem to think so as they are probably hoping that the unique plot and Johansson’s popularity gives the film a boost.

You never know as anything can happen. August is once again loaded with “B” action movies featuring a heavy dose of testosterone as other films like The Expendables III and Sin City: A Dame to Kill look to capture whatever is left of the summer action market. This should, in theory, help Lucy stand out from the crowd but it really needs a lot of luck to break out.