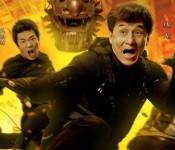 Supposedly Jackie Chan’s “last full-length action spectacle” Chinese Zodiac certainly marks the end of an era yet does Chan go out on a high note or does he embarrass himself silly?  For the most part, Chinese Zodiac is a return to form that exemplified Chan’s Chinese movie output circa the 1980s and early 1990s before Rumble in the Bronx propelled him to make a slew of average Hollywood movies.  This basically means that Chan has returned to making a lighthearted hokey film where the focus is clearly on innovative physical action sequences featuring Chan doing all his own stunts at the expense of plot, characterization and pace.  At the same time Chinese Zodiac features one horrendous misfire by including a totally pompous and preachy morality angle where characters often lurch into long patriotic diatribes that have as much subtlety as a giant mallet to the face.

It is the last point that is going to truly negatively affect the movie’s International viewers who will undoubtedly be appalled at how often a character decides to essentially stop the movie cold with a completely vitriolic stab at how Westerners should feel nothing but abject shame that their ancestors ransacked China for decades stealing her most prized treasures without an ounce of regret.  While there is certainly truth to this there is obviously a subtle way to bring this debate to light without aggravating the audience or completely ruining the film’s rhythm which unfortunately is a high road not taken.  Instead the film literally stops on a dime in certain instances when a character will suddenly launch into a venomous argument whose only intent is to denigrate and embarrass whoever they are speaking to.

A side-effect of these political and ethical diatribes is that it makes some characters woefully unsympathetic even if the person they are berating agrees with them and expresses empathy.  This in turn makes the offender seem completely juvenile as if they are throwing a tantrum that someone stole their pacifier.  The topic of art repatriation is certainly a serious one that bares thoughtful discussion but it requires a level-headed approach that the movie’s holier-than-thou tone lacks.

If not for these completely awkward moments Chinese Zodiac is a pretty fun movie especially the various action sequences which show that Chan has not lost a step both in pulling off the physical stunt work but also in concocting a carefully plotted choreography that is classic Chan combining awe-inspiring martial arts moves with comedy.  Chan has often been compared to Buster Keaton and this holds true here as the intricate set of physical moves utilizing any nearby object all link flawlessly in a seamless ballet that will leave audiences breathless.  Granted Jackie Chan is now pushing sixty and a lot of what he does here feels very much like homage to his old routines but it is still a sight to behold especially considering his advanced age.  Sure, there are a few sequences where green screen is used but by and large what you see is what you get.

For those who only care about the action there is a lot of it starting from a rather over-the-top prologue that has Chan’s character outfitted in what can best be described as a bodysuit that makes him a human luge as he throws himself down a winding road while being pursued by a gaggle of nondescript soldiers who have graduated from Hollywood’s school for villains as not one can hit the broadside of a barn.  There’s a bit of a dearth of action for a good thirty minutes or so after that but by the film’s mid-point things begin to pick up again with perhaps the most ludicrous yet hilarious sequence that evokes the best and worst of Indiana Jones and Romancing the Stone as Jackie Chan and his cohorts inexplicably fight off pirates, one of which is a dead-ringer for Jack Sparrow, while stuck in an underground cavern that concludes with the cast riding a massive tree trunk like a horse down the side of a mountain.  Yes, it’s completely bonkers yet it is done with such verve and tongue firmly planted in cheek that one can’t help but smile.  If you thought that was pushing the limits of believability just wait till you get to the climax featuring a skydiving foursome that fight for possession of a bronze Zodiac statue while plunging head-first towards an active volcano.  You almost expect the cast of Looney Tunes to appear.

Unfortunately, like even the best Jackie Chan movies, the plot for Chinese Zodiac is an odd mish-mash of totally inconsequential parts that oftentimes don’t make a lick of sense.  Instead of a coherent connect-the-dots narrative Chinese Zodiac doesn’t even bother to care for cogent exposition as scenes unceremoniously ram into one another rarely for any reason.  Major events such as double-crosses just happen out of the blue without any foreshadowing and characters are introduced without any fanfare.

Chinese Zodiac is loosely based on Chan’s Armour of God series essentially being part three of the trilogy although new fans will obviously not understand the connection.  Chan plays JC, a super thief who along with his team travels the world stealing ancient artifacts for their own monetary gain.  This time around a conniving CEO of MP Corporation, played totally inexplicably by Hollywood veteran Oliver Platt, hires JC and his team to steal the bronze statues of the Chinese Zodiac that were looted by the British.

JC is obviously the brains and leader of the group which also includes the usual Jackie Chan movie staple of having an International cast this time including South Korean heartthrob Kwon Sang-Woo, French actress Laura Weissbecker as well as female martial artists Zhang Lanxin and Caitlin Dechelle who actually fight mano-a-mano in one of the film’s more surprising fight sequences.  There are also a ton of cameos from famous Chinese actors and actresses including even Jackie Chan’s real wife whose character reveal actually makes some degree of sense.

Nevertheless, like all Jackie Chan movies the supporting cast all take the backseat here and although they get a scene or two to shine the film rarely gives them anything of significance to do or say.  At the same time the film makes a feeble attempt to bolt-on totally baffling backstories for each character that are unceremoniously thrown into the movie without any justification.  Seriously, I haven’t seen a film in a long time not bother to give history to any of the characters until well into the end of the second act when all of a sudden the movie pauses between action sequences to focus lamely on the individuals who all have some sort of social ill that has never been previously hinted upon.

To provide an analogy of how awkward this sounds imagine what viewers would think if Jack and Rose met on the Titanic and then right before their fateful dive into the watery ocean Jack suddenly says to Rose, “Oh by the way I’m married and have two kids I haven’t seen in a very long time.”  Not only would Rose react with dumbfounded looks but the audience itself will feel as if they were suddenly rear-ended and the victim of whiplash.  Such is the sorry state of the narrative here in Chinese Zodiac especially as it pertains to characters who reveal useless tidbits about their lives in precisely the wrong moments.  The film actually attempts to wrap up all these issues in the last five minutes leading to a headache-inducing migraine as one can literally feel the plot spinning its wheels vainly trying to get out of the massive narrative ditch of its own making.

Additionally, the film forces nearly every actor to utilize different languages oftentimes changing right in the middle of a paragraph of dialogue which gives the film an inherently choppy and downright kooky feel.  It goes without saying that everyone butchers a language not their own and you can’t help but laugh whenever an obvious voice-over narrator takes control as the actor/actress clearly has no clue how to pronounce certain words.  Whether done on purpose or not the voice-over rarely matches the actor’s regular tone and pitch making it ridiculously obvious that someone else is speaking in a foreign language. 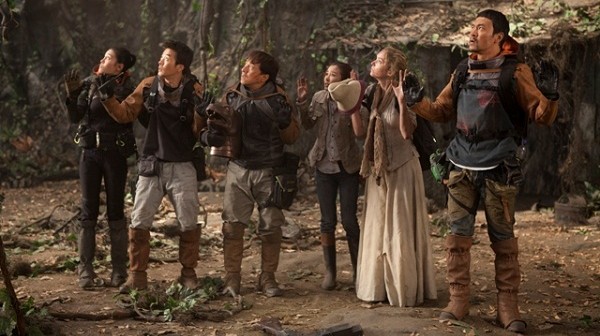 Chinese Zodiac bares every single merit and lamentable element of Chan’s heyday and though many fans will be pleased with the action here it has to be said that the inclusion of such rampant patriotism coupled with a large dose of “should be eliminated but it’s not” sexism and a cacophony of bad racial jokes and ill-advised lack of tact makes the film feel very much like it belongs in Hong Kong cinema circa the mid-1980s yet this is a 2012 film which gives the movie an incredibly dated feel.

Current Chinese film is still filled with the usual anti-Western and anti-Japanese storylines which is to be expected but watching the two main female protagonists fumble around like total childish clods with one of them more concerned with what she is wearing is something that doesn’t belong in mainstream cinema anymore.  Like the dinosaurs these are insensitive film elements that have been totally jettisoned for modern audiences and though one would expect to see them in films like, oh say, Birth of a Nation, I’m sure many viewers will simply be put off by their inclusion.

Chinese Zodiac is best seen as a kind of ego-trip[i] by Jackie Chan who attempts to go out in style by dipping into his past by reusing his proven formula that made him a superstar.  However, while he’s simply one of the best physical performers of all time with a keen eye for amazing choreography and decent directing the same can’t be said for his narrative prowess.  The mainland Chinese audience will probably not care that all these awkward elements are included but International viewers who really only know Chan from his Western film output should be forewarned that they are here and overtly in-your-face.

If you can ignore them the film is decent fair which actually works well for families who want less violence.  Sure, there are guns and other arms but by and large they are totally irrelevant as Chan has always focused on the amazing feats the human body can do over rambunctious bullet play.  Better yet, if some enterprising editor can snip a few minutes of film out here and there Chinese Zodiac would work on even the Disney channel.  I’m sure that Jackie Chan will still keep making additional movies but one hopes that he gets some serious help with the screenwriting duties.

[i] * As a footnote: Jackie Chan has entered the Guinness Book of World Records for his work on this film once for the most stunts performed by a living actor and, more significantly, the man with the most film credits in one movie.  Just peruse the credits and you’ll see Chan’s name plastered everywhere from places you’d expect such as actor/writer/producer to totally weird credits such as lighting, music score and…catering coordinator…