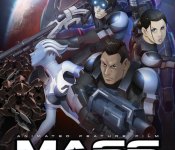 If you are wondering who exactly is making this anime it is collaboration between American company Funimation and Production I.G. the Japanese firm famous for their work on anime such as Ghost in the Shell, Blood: The Last Vampire, xxxHolic, FLCL, Patlabor and many others.

I for one have always admired anime from my very first introduction to the art form coming from Star Blazers (Space Battleship Yamato) and then proceeding to Robotech (Macross).  I’ve been more or less hooked ever since but I will admit that anime does not appeal to everyone and I would assert that traditional 2D animation has long since been superseded by 3D in the eyes of the general public.  It is now extremely rare to see mainstream Hollywood 2D movies, the last major release being Disney’s The Princess and the Frog which attempted to rekindle the art form much like The Little Mermaid brought the company back from the “dead” back in 1989.

Unfortunately, that didn’t exactly turn out as planned and though The Princess and the Frog ended up with around $104 million in domestic gross and a combined $267 cumulative gross after foreign receipts that is far lower than Disney hoped for and a far cry from what new 3D family films now generate.  As a comparison Pixar’s last movie, Cars 2, raked in a combined $559 million global gross and before that Toy Story 3 took in over $1 billion USD.  Even if one discounts all the Pixar sequels they still make Disney far more than its traditional 2D animated films with Up at $731 million and Wall-E at $521 million.

Regardless, here is the synopsis for Mass Effect: Paragon Lost directly from Funimation’s website:

“Mass Effect: Paragon Lost is the prequel to the highly-anticipated Mass Effect 3 and follows the early career of Alliance Marine, James Vega. Vega leads an elite Special Forces squad into battle against a mysterious alien threat known as The Collectors. Stationed at a colony in a remote star system, Vega and his soldiers must protect the civilians from a ruthless invasion determined to capture the population for unknown purposes. Learn more about the Mass Effect universe with an unprecedented glimpse into the haunted past of Mass Effect’s newest hero!”

For those diehard Mass Effect fans the anime is now available for pre-order through Amazon with a current list price of $24.49 USD.  Thankfully, it is a combo release meaning you get the DVD and the Blu-Ray in the same package.

Oh, and if anime isn’t your thing than perhaps a Femshep Kotobukiya figure will suffice.  Yes, this is the next release in Kotobukiya’s Bishoujo Mass Effect line of figures designed by Shunya Yamashita who is the artist who worked on Kotobukiya’s Marvel statues that includes Black Widow, Rogue, Psylocke and many others.  It is aiming to be released sometime in the Fall/Winter 2012.