I remember when I first saw Fist of Legend back in the early nineties on a terrible VHS copy and though the picture quality was abysmal and the sound regularly popped and crackled I remember being fixated on the film not only due to the superlative martial arts sequences but on the overall plot which felt wholly fresh and engaging.  Fast forward to 2012 and here I am watching Fist of Legend again this time on blu-ray and though the picture and sound quality are vastly improved the entire film still feels as fresh as it did all those years ago.  While Jet Li has certainly become an International star since then there is also no questioning that in looking back at his career that Fist of Legend is regarded as one of the best if not the best film he has ever made.

Fist of Legend is a loose remake of the legendary Fist of Fury/Chinese Connection movie starring Bruce Lee featuring the same character named Chen Zhen who has the unenviable task of avenging his slain master Huo Yuan Jia who has been unfairly bested in martial arts combat due to some nefarious poisoning to ensure his demise.  It certainly takes some intestinal fortitude to tackle a remake of one of the most well-regarded martial arts films but both Jet Li and director Gordon Chan more than match the original and in some cases blow it straight out of the water.

Watching Fist of Legend the first thing that many will notice is that it contains a very layered plot with distinct character arcs as well as a clever integration of powerful subjects key being racism and the definition of honour.  While the latter is something seen in many other genre films it is the inclusion of a complex subplot featuring cultural tension between the Chinese and Japanese that gives the film a real bite.  Director Gordon Chan and the screenwriters have thoughtfully chosen to fairly show both sides under a positive and negative light unlike many Hong Kong movies of this period which automatically demonize the Japanese invaders as being nothing more than evil louts.  Unfortunately, this form of filmmaking still exists in modern Chinese cinema which is a real shame since making any villain pure evil without much insight into why they have become this way is downright tedious and unhelpful as it robs the film of a powerful potential conflict between the protagonist and antagonist.

The year is 1937 and the setting is the Shanghai International settlement where British, Chinese and Japanese influences regularly clashed against one another.  While Chen Zhen (Jet Li) is in Kyoto, Japan he overhears the news that his master Huo Yuan Jia has been bested in combat and fatally wounded.  Although he has a comfortable life and a more than congenial relationship with a Japanese student named Mitsuko (Shinobu Nakayama) Chen Zhen decides to return to Shanghai seeking answers.  Arriving at his old master’s martial arts school the students and its new head Ting An (Chin Siu Ho) welcome him back with open arms yet the atmosphere is bittersweet as they are still mourning the loss of their master.

Right off the bat it is obvious that Chen Zhen brings with him not only his considerable martial arts prowess but also his education in the latest Western technology and scientific acumen thus he quickly wins the hearts and minds of the students by showcasing his skill in both disciplines.  This sets up a nice dichotomy between him and Ting An who finds his position threatened by his old friend who has clearly surpassed him on all fronts.  Using his modern skills, Chen Zhen comes to realize that his old master was poisoned thus setting the film on its revenge seeking path.

As stated before, the movie does an exemplary job of focusing on racism from both Chinese and Japanese and this comes to a head when Mitsuko arrives from Japan to defend Chen Zhen’s honour and provide him with a fake alibi that allows him to escape incarceration.  By stating that the duo are in fact lovers she shows great strength of will and courage knowing that her position will be severely affected as her fellow Japanese would shun her for seemingly degrading herself with a Chinese man.  Yet the opposite is proven true as well as the Chinese members of the martial arts school outright reject Chen Zhen bringing her there even though they all realize the sacrifice that she has done in order to save him.  Instead, they fall back on a stereotypical position that all Japanese are not to be trusted and force Chen Zhen to choose between the school or her.  Being an honest and noble man he sides with her and quits the school even though he cannot find a suitable place in Shanghai that will allow her to stay with him with the local Chinese population at one point pelting the lovers with vegetables and other projectiles.  Undaunted, the two leave the city and actually setup a rundown shack right next to Huo Yuan Jia’s tombstone and though conditions are tough it is obvious that their love provides the fuel to keep them going.

The film does not pull any punches and adds a smart juxtaposition that highlights the inherent bigotry that many possess.  In this case it is revealed that Ting An has had a long going affair with a local whore and has been trying to keep it a secret.  However, once it is out in the open the martial arts members welcome her with open arms even though she is of ill-repute.  This contrasts wonderfully with their treatment of Mitsuko who even though she risked everything is somehow looked upon as being worse than Ting An’s whore. 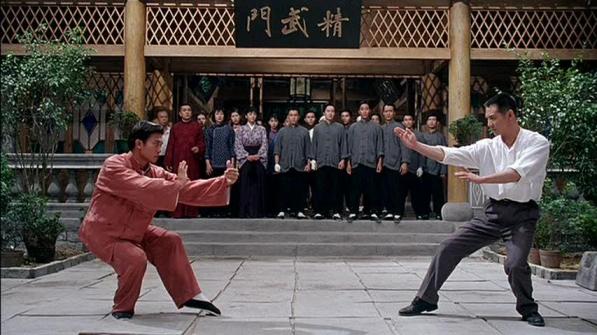 Although Fist of Legend has a very solid narrative many fans will still find nothing to talk about but the martial arts action and there is a reason why – it’s brutal and fast and more than anything else feels raw and full of energy.  Much of the kudos goes to choreographer Yuen Wo Ping but Gordon Chan deserves some credit as well since the duo have clearly decided to forego as much wire work as possible to showcase everyone’s true martial arts skill.  Additionally, anyone who has read all my reviews will notice that one of the biggest issues in crafting a superlative martial arts fight sequence is actually the simplest technique of all to basically sit back and let the camera shoot giving audiences longer takes that capture the free flow of the action.  Slow motion is great as a method to emphasize certain moves but excessive use of it merely makes the audience call into question the actor’s physical skill and should really only be used along with quick cuts when those involved don’t have any martial arts proficiency and are merely following choreographed steps.

There are so many directors who seem to have graduated from the Michael Bay MTV school of filmmaking where action sequences come at you at with a plethora of rapid cuts and edits in order to somehow take D.W. Griffth’s method of generating tension seen in Birth of a Nation to its ludicrous extreme but instead make everything incomprehensible.  In all seriousness, there is nothing as graceful nor as deadly as watching a real human being fight against an equally skilled opponent so there is no reason to constantly be editing to the point where everything seems a quick blur.  Fist of Legend works in part because Gordon Chan is content to let his actors do the “talking” as they basically beat the living tar out of one another using their skill and whatever environmental hazards are nearby.

There is a great interview with Gordon Chan on the special features as he explains his opinion that the fights be brutal plus an insightful comment regarding the final showdown that takes place in a Japanese dojo with low ceilings.  While Chan admits that he did this partly to convince audiences that no wires were used it also serves to create a more claustrophobic atmosphere and provides Chan a good opportunity to use lower angles to highlight his fighters.  While the showdown is certainly a great action piece the highlight is actually Chen Zhen’s fight with his Japanese martial arts mentor named Funakoshi (Yasuaki Kurata) which manages to imbue the battle with a kind of light-hearted wit due mainly to actor Yasuaki Kurata whose wry smile and decidedly off-kilter warm up exercises seem to test Chen Zhen’s patience.  The two masters create a wholly even-matched fight climaxing with what might seem on paper to be a ludicrous setup as both wear blindfolds as they rely on their other senses to guide them.  However, it’s done so earnestly that the audience believes it to be true and by the end there is a tranquil acceptance about what it means to have true honour.