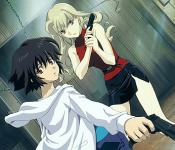 I remember almost a decade ago when I was nearing the climax of the Noir anime series that an idea popped into my head that here at last was a candidate for easiest translation of anime to Western cinema as there was nothing in it that would take either a gargantuan budget to produce or a massive rewrite to make it palatable for American viewers.

The story which focuses on two female assassins who at first appear to have no possible relationship but slowly discover that they are being manipulated by a shadowy organization would make a great one hour serialized action/drama or a feature film.  Of course, I thought nothing more of it until a few months ago when word finally leaked that Noir had been given the green-light to go into production as an American television show produced by none other than the director of Spiderman, Sam Raimi.

I’m still shocked it took over a decade before someone in Hollywood realized the series’ potential as it took nothing less than an A-list director to make the project a reality.  Of course, this decision to bring Noir to American television makes sense when one considers the current state of network television with previous hits such as Alias and Dark Angel and of course, recent hits such as the rebooted Nikita featuring Maggie Q in the lead role which managed to revive the franchise by ramping up the sexual quotient as well as adding a new subplot featuring her protégé who has infiltrated the “organization.”  Looking at it in this light it’s a no-brainer that the Starz network decided to push Raimi’s Noir adaptation into production in an effort to appeal to a similar demographic.

As of now there is precious little information of what Raimi and his development crew intend to do with the story and obviously there is no casting news either.  If it were up to me this is a perfect opportunity to hire some unknown actresses with no baggage.  However, some tidbits have managed to leak out and judging from the casting sheets it seems obvious that Raimi has tinkered with the Japanese source material although it certainly appears to have a similar structure.

Here’s hoping they manage to pull it off or else there are going to be many anime fans brandishing pitch-forks at Raimi’s door, a sight not seen since the Dragonball Evolution debacle. Although Noir features much action at its heart the series works because it manages to create a wholly wonderful relationship between its two leads whose dispositions cannot be more opposite.  I can understand Raimi and the network wanting more emphasis on action, violence and outright sex ala their hit reboot of Spartacus but it should not come at the expense of compelling character interaction.

More information as it leaks but I will give one big piece of advice if Raimi, however unlikely, hits this blog: Do everything you can to keep Yuki Kajiura’s music especially Canta Per Me as I’m sure anime fans will jump for joy if it plays during the show’s action sequences.  I cannot stress how important it is to the anime as it is one of the greatest scores around.

Note: For the uninitiated here’s a video of Yuki Kajiura’s Fictionjunction band members singing Canta Per Me live or if you prefer it with an orchestra there’s the Eminence concert edition for your aural pleasure.