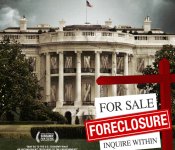 Sometimes the simplest solutions to daunting problems are the easiest to ignore. There’s a small snippet from a Saturday Night Live skit featuring Steve Martin and Amy Poehler as a regular American couple who are having trouble comprehending a new book written by Chris Parnell called, “Don’t Buy Stuff You Cannot Afford.” The basic message is incredibly self-evident but being a comedy sketch Steve Martin continues to be befuddled, as he agonizingly can’t seem to wrap his brain around such an inherently simple concept. We can laugh and shake our heads but it highlights a greater issue – most people don’t follow this advice including the US Federal government.

Economics has always been a rather dry topic with enough jargon and abstract ideas to confuse even the savviest citizen. Deficits and overall debt of a country is an even more obtuse subject that politicians seem to pay lip service to but never have been able to convey clearly to the public. I.O.U.S.A. is a documentary that attempts to shed some needed light onto the topic by highlighting the need to pay down the national debt of the United States of America. It attempts to present the argument in basic layman language or as much as it can afford to dumb down the inherently complicated mesh of the problem at hand.

For the most part, director and writer Patrick Creadon follows the exploits of David Walker, the former comptroller general and Robert Bixby who runs the nonprofit Concord Coalition who ally with one another in an effort to travel across America on a “Fiscal Wakeup” tour to educate anyone who will listen to them about the perils of a spiraling deficit. Their enthusiasm for their cause is infallible but the duo find themselves playing to small crowds made up of generally more mature folk who seem to have more affinity for the problem at hand. Often times they are interviewed by local broadcasters such as during a stop in New Hamphire where they are verbally promised a slot on the late night news but are instead dropped for a rather moronic tale of someone swallowing their wedding ring. No doubt the task at hand is immense but the duo carries on their crusade in hope that the issue will finally find traction with the public.

Of course, it doesn’t help when the public at hand has zero interest and has absolutely no understanding of even basic economic news. Interspersed throughout the documentary are interviews with common citizens who are asked questions such as, “How big is the US Deficit?” or “How do countries borrow money they need?” The interviewees suddenly appear like they’ve been caught like deer in a pair of headlights as they stumble for any sort of coherent answer. Needless to say, not one gets it correct. Most, if not all, don’t even come close. I’m sure no ill intent was directed to these people but watching each person flub each question will make any viewer weary as to the general population’s intellect. Then again, I myself am not to surprised as we’ve seen similar segments on late night television such as on Jay Leno or Conan O’Brien where they wander the street asking seemingly easy questions that everyone gets wrong.

The documentary itself presents a reasonably non-partisan case that goes out of its way to not place blame on either party although there is a strong undercurrent that runs throughout that hints of the filmmaker’s lack of respect for, at that time, the current President George W. Bush who pops up every now and then to deliver yet another whopper of a statement such as when a reporter asks, “Do you think there’s a risk of a recession? How do you rate that?” to which he replies, “Ask the economists. I think I only got a B-minus in economics. But I got an A-plus in cutting taxes.”

You could almost hear the collective groans from all the reporters who were present when he uttered his response. It doesn’t take a genius to realize just how flippant that remark turned out to be and it probably didn’t help that Bush basically chuckled and smirked at his own reply.

Regardless, the movie breaks down its core argument into four ideas or concepts that have to be addressed or fixed in order to start the economy down the right path to eliminate the deficit such as the Trade Deficit or Leadership Deficit. All four of these are touched upon in a sort of high-level focus that presents the problem but rarely hints at any sort of solution. That is not to say the film does not deliver in its message but often times one wonders if anyone in the USA has any clue just how to start fixing an inherently untenable position.

One of the biggest chunks of the documentary focuses on the Federal Reserve and monetary policy and though it really tries to explain how it works this section comes off as muddled and unfocused leaving the audience wondering if the chairman of the Fed is really doing nothing but guessing at how markets will react. Of course, this is inherently true but I doubt many watching will feel reassured that such an integral part of the system comes down to pure luck.

Other key figures interviewed throughout the documentary include Paul Volker, Paul O’Neill, and even former Republican Presidential candidate Ron Paul who basically embarrasses former Chairman of the Fed Alan Greenspan during a congressional hearing. Even mega billionaire Warren Buffet shows up in a segment that highlights how deeply indebt America is to foreign stakeholders, most notably China.

With the aid of numerous charts, graphs and historical data the complicated issue slowly begins to make a heck of a lot more sense but as all issues that have to do with the political world the answer always seems to start and end with political will. In short, no one wants to inflict harm on themselves. Citizens will never easily volunteer to pay more tax whereas politicians who fear for their position in government will never venture anywhere close to saying that they support a higher tax rate. Instead, we have easy arguments focused on getting rid of government fat while reducing taxes that make absolutely no sense yet always seem to resonate with the voters.

I.O.U.S.A. is intended to scare, as it should. Basic human nature has insulated most citizens around the globe to only care about the small close-knit circle of friends and relatives around them. They’ll respond to threats only when provoked or when staring at them face to face. Abstract concepts like national debt seem as relevant or as real as alien invasions from Mars.

Running at a lean 85 minutes the documentary succeeds in bringing the argument to light and the filmmakers can only hope that many people end up watching it. Yes, solutions are not present but hopefully a grassroots phenomenon starts to swell to confront the issue. America might be the focus here but this is a universal problem that countries always have to deal with. There’s a section where a local radio station is interviewing David Walker and he presents the historical case of the Roman Empire that partially collapsed due to a bad economic policy. Later in the program it highlights the Suez crisis in the 1950s where the US used its considerable foreign holdings of the British Pound to force them to change their foreign policy and end their war with Egypt. Clearly, this issue has a cornucopia of interconnected elements that can derail any power. Only time will tell if the average citizen wakes up and realizes that everything around them actually belongs to some farmer in China.